The Federal Census occurs every ten years and are arranged by state and county. Entries on census schedules are by address. Additionally, the records are divided into small geographical areas called enumeration districts (ED).

Our collection includes indices of United States Federal Census records for Lake County for 1860, 1870, 1880, 1900, 1910, 1920, and 1930. Please note that there is no 1890 census as it was damaged and destroyed by fire in 1921, and less than one percent of the schedules are available for research today. These indices give a person's name (as determined by the indexer), age, sex, race, their enumeration district, page number, and line number. This information helps locate the exact page of the census, which we have available on our microfilm computer in the library. Federal censuses are available online, as well, through genealogy websites such as FamilySearch.org and Ancestry.com (see online resources section below).

State censuses were often taken in years between the federal censuses. Colorado conducted the state census on June 1, 1885. Our Colorado State Census Index for 1885 includes each person's name (as determined by the indexer), age, sex, enumeration district (ED), page number, and line number. The information from the index helps locate the exact page of the census, which we have available on our microfilm computer in the library. The Colorado State Census is also available online through genealogy websites such as FamilySearch.org and Ancestry.com. This census has become a highly valuable source as it provides a wealth of information that would otherwise be found in the 1890 Federal Census. The Colorado State Census Index is digitized and available for download here.

Why Are Census Records Important?

Census information can be quite valuable for family research. You may discover clues about new relatives to add to your family tree, find information that helps you construct family groups, and sometimes you'll discover interesting details you didn't know before. Since 1880, censuses can often help you reconstruct your family tree because they provide genealogy-rich information like names, relationships, approximate birth years, marital status, birthplaces, and parents’ birthplaces. Some details shed light on your ancestors’ immigration and naturalization, homeownership, literacy, education, childbearing history, neighborhood makeup, and more. Older censuses aren’t quite so detailed. In 1850, 1860, and 1870, you’ll find each family member listed, but not their relationship to the head of the household. You can often guess at the family structure, though, since the father was supposed to be listed first, then the mother, then their children beginning with the oldest, then other relatives followed by non-relatives, such as boarders or servants. You’ll want to consult other records to confirm those inferred family relationships. (This helpful information came from the FamilySearch.org Blog.)

Here is an example of how to use our census indices to locate someone in the actual census records. On the left is a page from the 1885 Colorado State Census. The headings were not put on each page, but the first column is Name, second column is Age, third column is Sex, fourth column is Enumeration District (ED), fifth column is Page Number, and last column is the Line Number. The Abbott family is highlighted, consisting of William (age 53), Elizabeth (age 51), Ambrose (age 16), and Violet (age 7). We can tell from the index page that they are living together because they all are in Enumeration District 5, they're all on page 51, and their line numbers are consecutive. It is difficult to see the corresponding information on the page on the right, but you can click the image to enlarge it. The page on the right is page 51 for Lake County, Enumeration District 5, in the 1885 Colorado State Census. The highlighted section is where William, Elizabeth, Ambrose, and Violet Abbott appear. William is the head of house, Elizabeth is his wife, Ambrose, his son, and Violet his daughter. William's occupation is a little difficult to read, but it looks like it says miner. Elizabeth's occupation says she keeps house, Ambrose is at school, and nothing is written for Violet. Further down there are marks indicating that Ambrose and Violet both attended school within the census year. We also know that William, Elizabeth, and Ambrose were born in England, and Violet was born in Ohio. William's parents and Elizabeth's parents were also born in England. This information is helpful because as you see on the left, there are two William Abbotts in the 1885 Colorado Census. So, if you are researching William Abbott, and you know that he came to Leadville with his family, you know that he was a miner, and he was born in England, then you know you found the right one. 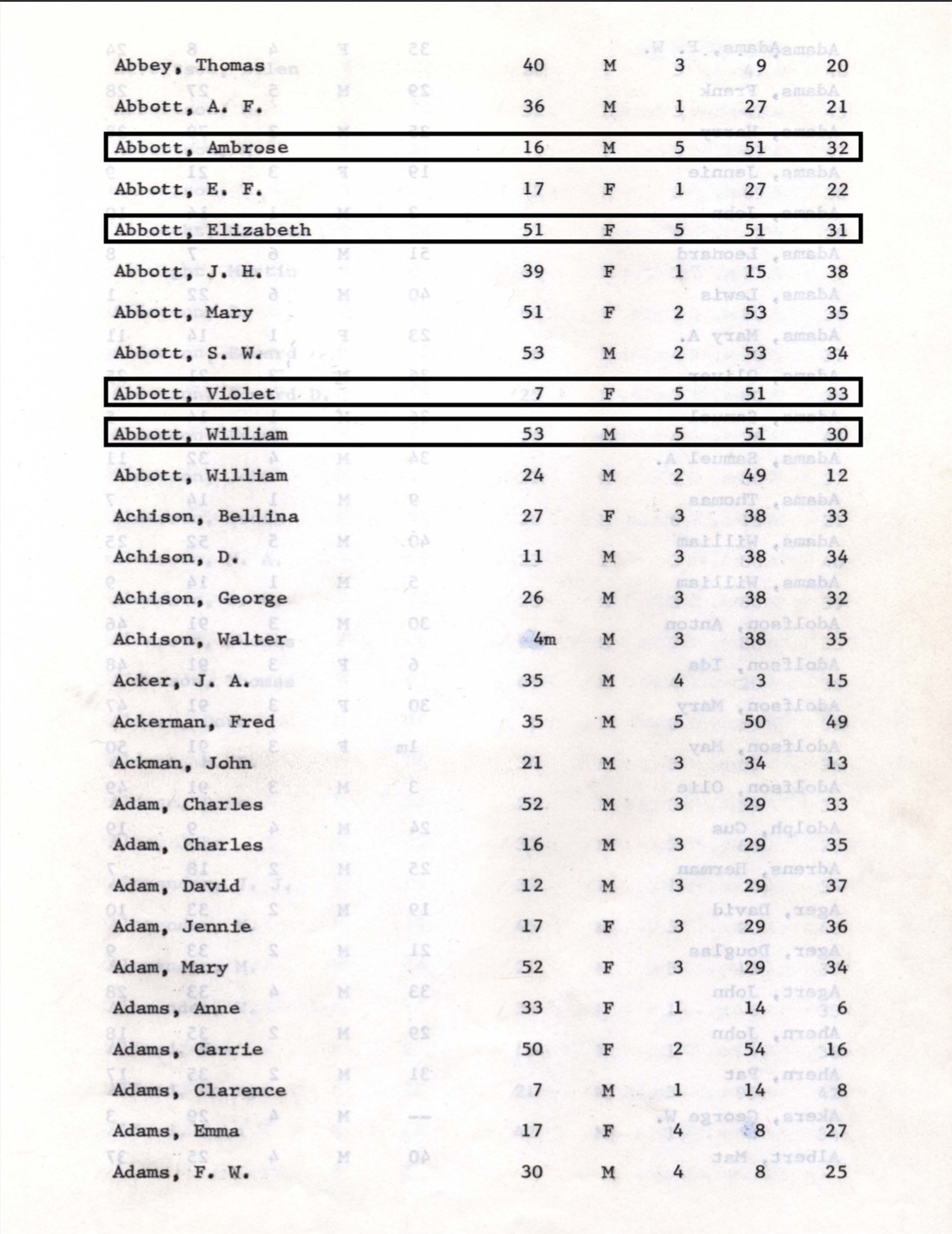 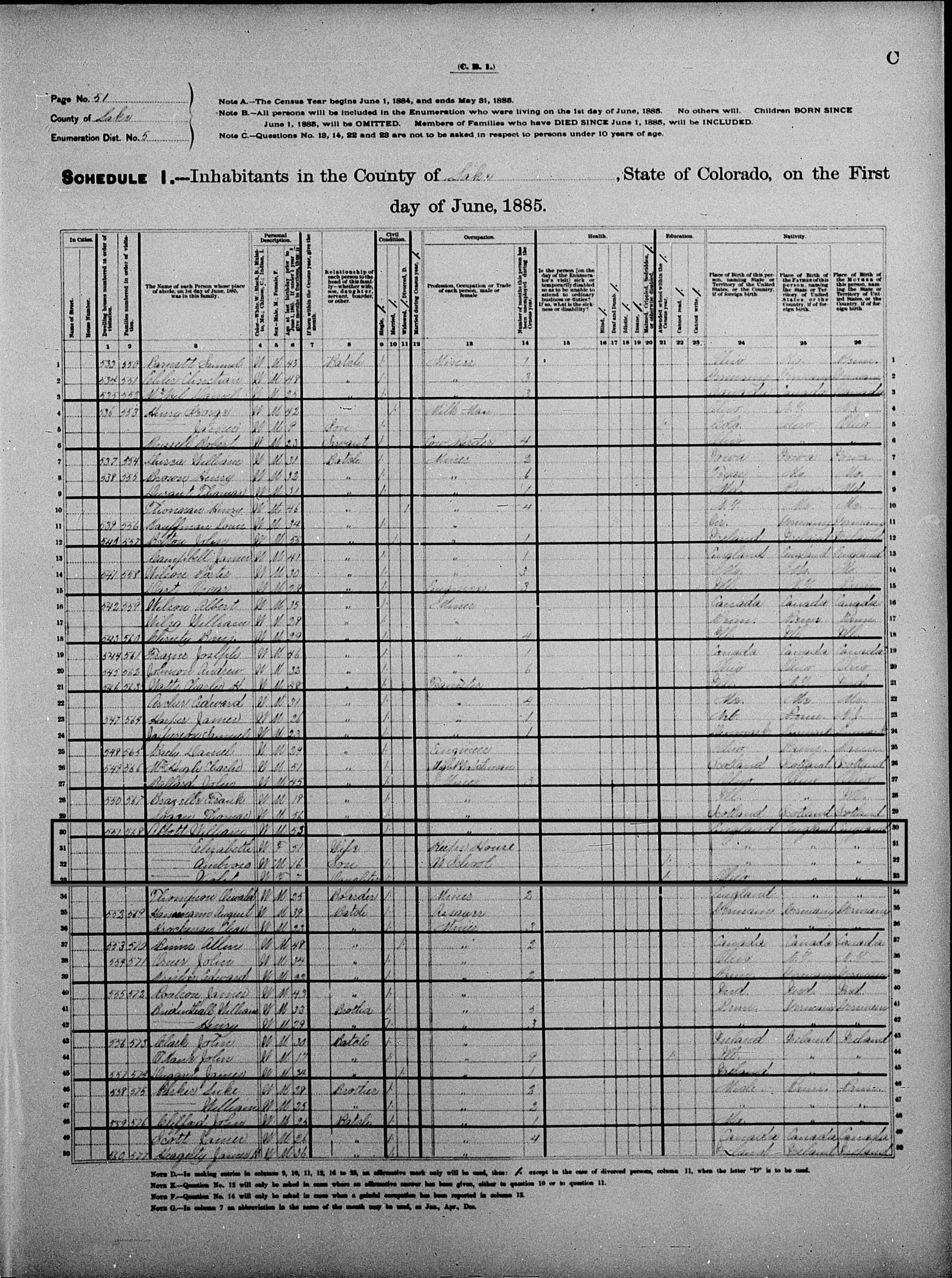 HOW DO I...?
Get a Library Card
Curbside Pickup & Delivery
Interlibrary Loan
Suggest a Purchase
Book Bike & Mobile Checkout